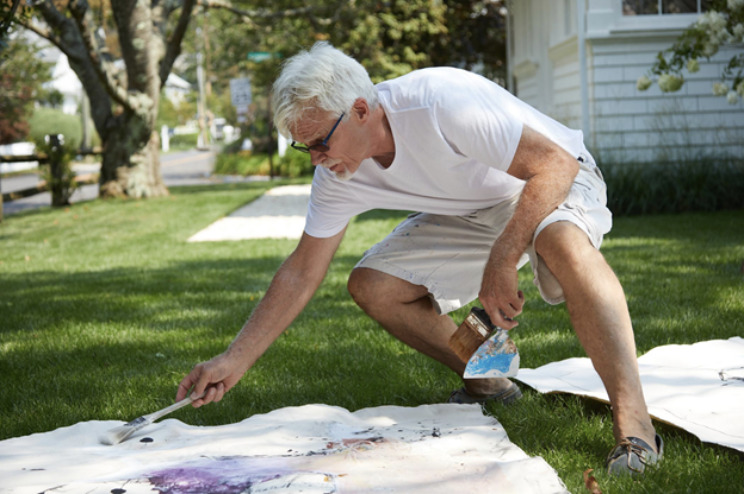 Westport, CT – Westport-based abstract painter David Stephen Johnson will finish the current year with three main exhibitions taking place in France and Spain, from December 2020 to January 2021, marking the artist’s debut in the Old Continent. This agenda illustrates an intense spirit and movement present in Johnson’s art, his imprint, and -more importantly- […]

Westport, CT – Westport-based abstract painter David Stephen Johnson will finish the current year with three main exhibitions taking place in France and Spain, from December 2020 to January 2021, marking the artist’s debut in the Old Continent. This agenda illustrates an intense spirit and movement present in Johnson’s art, his imprint, and -more importantly- what has propelled his career beyond the American artistic circuit over a short period of time.

David Stephen Johnson, whose latest exhibit was during Miami Art Week’s last edition in December 2019, will present a selection of his recent works from December 7th to the end of January 2021 in a group exhibition called Year Representation at Galerie Sonia Monti. This up and coming gallery is based in the exclusive 8th Arrondissement in Paris, France, neighbouring the Champs Elysées. The group exhibition will engage a diversity of contemporary abstract and expressionist artists from all over the world, such as Begoña Lafuente (Netherlands), Vasco Kirov (South Africa), Liesbeth Willaert (Belgium) and Valérie Piquard (France). Johnson will be the only American painter featured in this exhibit.

At the beginning of 2021 Johnson plans to return to Europe, this time invited to show his work at the International Contemporary Art Fair in Paris – renowned ART3F. Represented by Madrid’s Van Gogh Art Gallery as a selected international artist, his exhibition will run for the duration of the art fair: from January 31st to February 2nd. ART3F is a contemporary art salon located at Port de Versailles that welcomes, across their 10,000 square meters, just one hundred galleries worldwide. This major cultural event attracts collectors, cultural institutions and art lovers alike. Following a strictly developed biosecurity protocol, the event sets the exhibition one step ahead in reinventing art fairs in these challenging times, keeping Paris at the avant-garde.

An active end-of-the-year is approaching for this fast-paced artist who, despite the context, managed to focus on his artistic creations, strengthening his outreach with outstanding results. The participation of David Stephen Johnson in these three European art exhibitions confirms the relevance of his work in the international contemporary art scene.

David Stephen Johnson (b. Pittsburgh, 1949) is an abstract painter based in Westport, CT. He was a star quarterback for South Dakota State. As a self-taught artist, he spent 30 years developing a deliberately unpublished body of work, until his residency at Silvermine Arts Center in 2019. Going large-scale with his series “Inception”, he had his first solo show at Southport Galleries, CT. That same year, after being noticed by an Aspen-based art consultant, he debuted at Spectrum Art Fair in Miami Basel Art Week invited by ArtBlend Gallery. In 2020 he participated in Intersect Aspen Art Fair, and in the acclaimed Hamptons Virtual Art Fair, where he was selected by its committee as a featured artist. He has recently been invited to show works in the Galerie Sonia Monti in Paris in December. That same month, he has also been invited to show works at Galeria Azur for their end-of-the-year exhibition.  Van Gogh Art Gallery, located in Madrid too, will show his work at the International Contemporary Art Fair in Paris in January 2021. In the Spring of that year, David will present a solo booth at Art Expo New York on Pier 94 in Manhattan. His work has been selected to participate in the Contemporary Art Biennial of Buenos Aires, Argentina, to be held at Palais de Glas in May 2021.