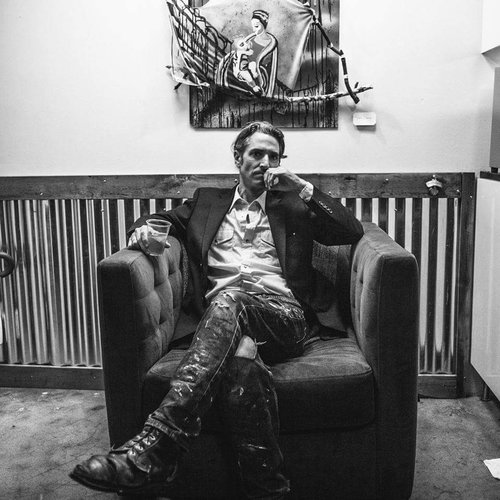 William Sorvillo believes art is capable of three things: “If it’s good, it’ll make you think. If it’s great, it’ll
make you feel and if it’s genius, it will inspire.”
His art, which consists of independent works, commissions, and murals, has appeared in Vanity Fair, on
The Bloomberg Channel and has been shown in galleries across the globe from New York City and
Brooklyn to Miami, Santa Fe and South Korea. In Seoul, his painting Malagueñas was the flagship piece
for the US-South Korea International Art Show during the 2018 Olympics.
Sorvillo started his artistic studies at the age of six. At fifteen, he began having lucid dreams of future
paintings which continue to inform his work to this day. He feels that he is a conduit and that his artwork
is an expression of those experiences. From spiritual and religious themes to perspectives on social and
civil rights, love and loss, his work is tied together by his passion for authentic expression.
The son of an Episcopal priest, Sorvillo has sought to deepen his knowledge of his craft and his
understanding of the human condition by exploring art and spirituality from various perspectives. He has
studied with Lakota Medicine Men in South Dakota, Buddhist monks in Japan, yogis in the caves of the
Himalayas, a shaman from Peru, and an East Indian teacher in Key West.
He has lived with Hindu swamis in the south of India where he taught tantric yoga, and with Augustinian
Monks in San Gimignano, where he studied the Renaissance Masters in Florence, Italy. His continued
interest in eastern cultures inspired him to obtain a Masters of Science and Oriental Medicine while he
painted and showed his artwork in Santa Fe, NM.
He currently lives and creates in Bushwick, Brooklyn with his wife and their four cats. His artwork
continues to expose his unbridled curiosity and reflect his unwillingness to acquiesce to
traditional expectations.