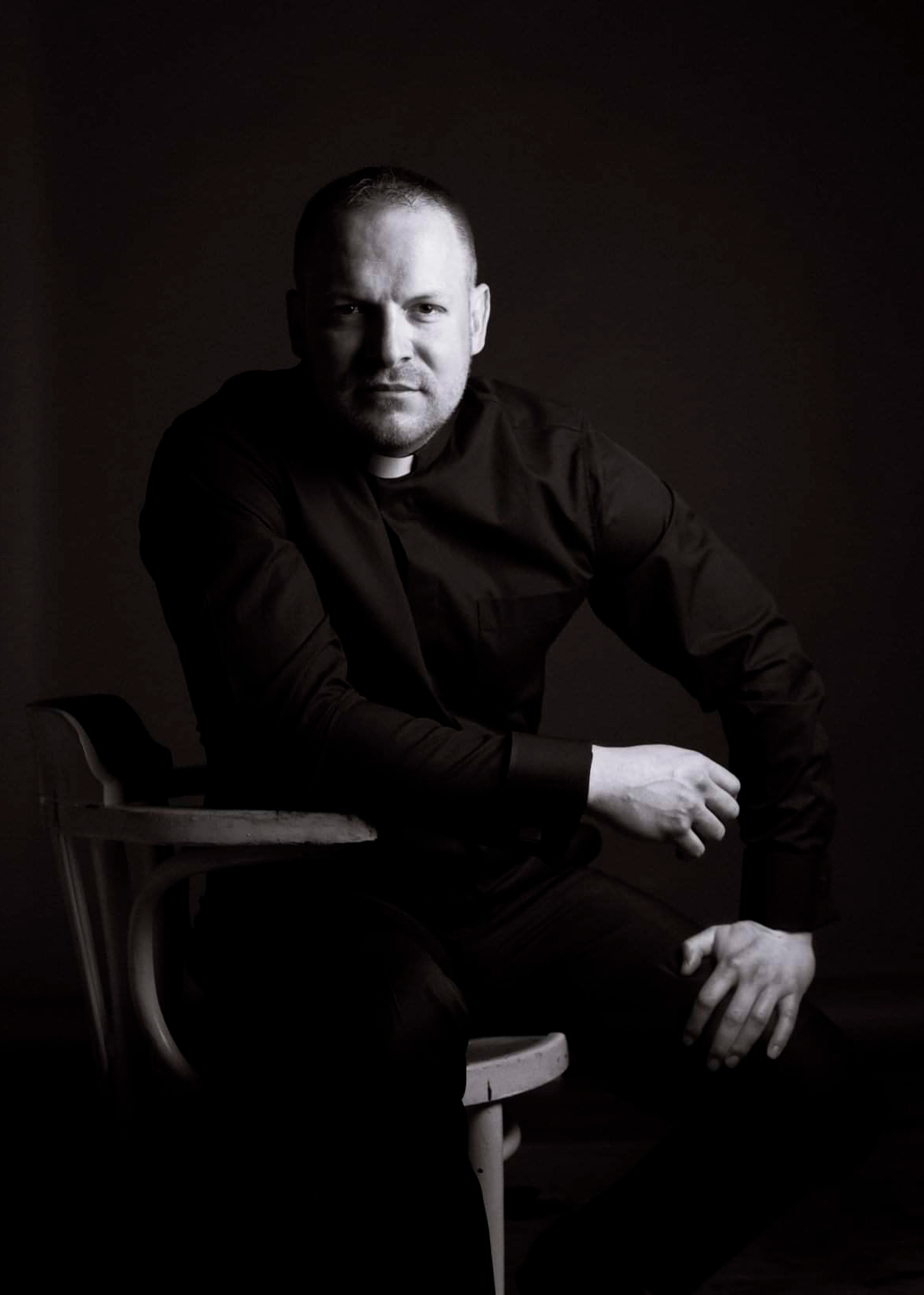 Born February 14 in Bratislava
1997 – 2002 Studied opera singing at the Catholic Conservatory of St Cecilia in Bratislava
Performed with Lúč nica ensemble and in Schlosstheater in Vienna
Concert tour with the string orchestra Strieborné struny (Silver Strings)
in Austria, USA and Australia
2003 – 2009 Studied at the Theological Faculty of Comenius University in Bratislava
2003 – 2012 Private tuition from painter Pavol Potočka
2009 Ordained as deacon
2010 Ordained as priest and becomes a parish priest at Skalica
2011 – 2013 Chaplain at Rača
2013 – 2016 Chaplain at Podunajské Biskupice
2016 Beginning of cooperation in charity concerts with the singer Lucie Bílá
2016 Chaplain at Blumentál
2018 Chaplain at Šamorín
2020 Priest in the church of St. George in Borský Svätý Jur
2022 Academy Atelier | P. Bartoš | Bratislava
Laureate
of the MARTIN BENKA
AWARD for 2020
Contract with
VanGoghArtGallery
in Madrid 2022
Martin Safarik is a young Slovak Catholic priest who
simultaneously studied opera singing and received
private tuition from a well-known Bratislava painter
Pavel Potoček. Over the period of the last ten years,
nineteen exhibitions presented him to the public
as a creative exponent of spiritual work inspired by
Christianity, and an artist with an extremely sensitive
approach to the complex issues of human existence,
responsibility and faith.
The latest works by Martin Safarik reflect the
concepts of homeland, nation, faith, as well as
national pride and humility, hospitality and, above
all, the awareness of one’s own identity in Europe.
This spiritual message from Slovakia to the world
interpreted by universal symbols and metaphors
blends a number of meanings: the Cross as a universal symbol of Christian faith and life.
The ever-present clouds and outlines of mountains
evoke open space and the character of our country
and its inhabitants, as well as the magically
impressive face of Christ reminiscent of the artist’s
unshakeable religious faith. Symbols and signs
are complemented with colour symbolism. Grey
as a symbol of spirituality is juxtaposed with gold
pigment adding grandeur. The painter also uses
black to add a touch of drama, and the colours
of our national flag, endowing his paintings
with life and distinction.
The new paintings by Martin Safarik indicate
that he temporarily abandons the subtle range of
broken colour tones in favour of darker hues and a more expressive style, using the light as an element
enhancing the dramatic effect of his paintings.
The sense of mysticism and mystery remains, but
it is much clearer. Despite the shift towards the
boundaries between reality and abstraction, we
perceive his paintings as spiritual messages. Their
potential is enhanced by the power of the artist’s
personality combining determination, sacrifice and
priestly faith with imagination, emotion
and creativity