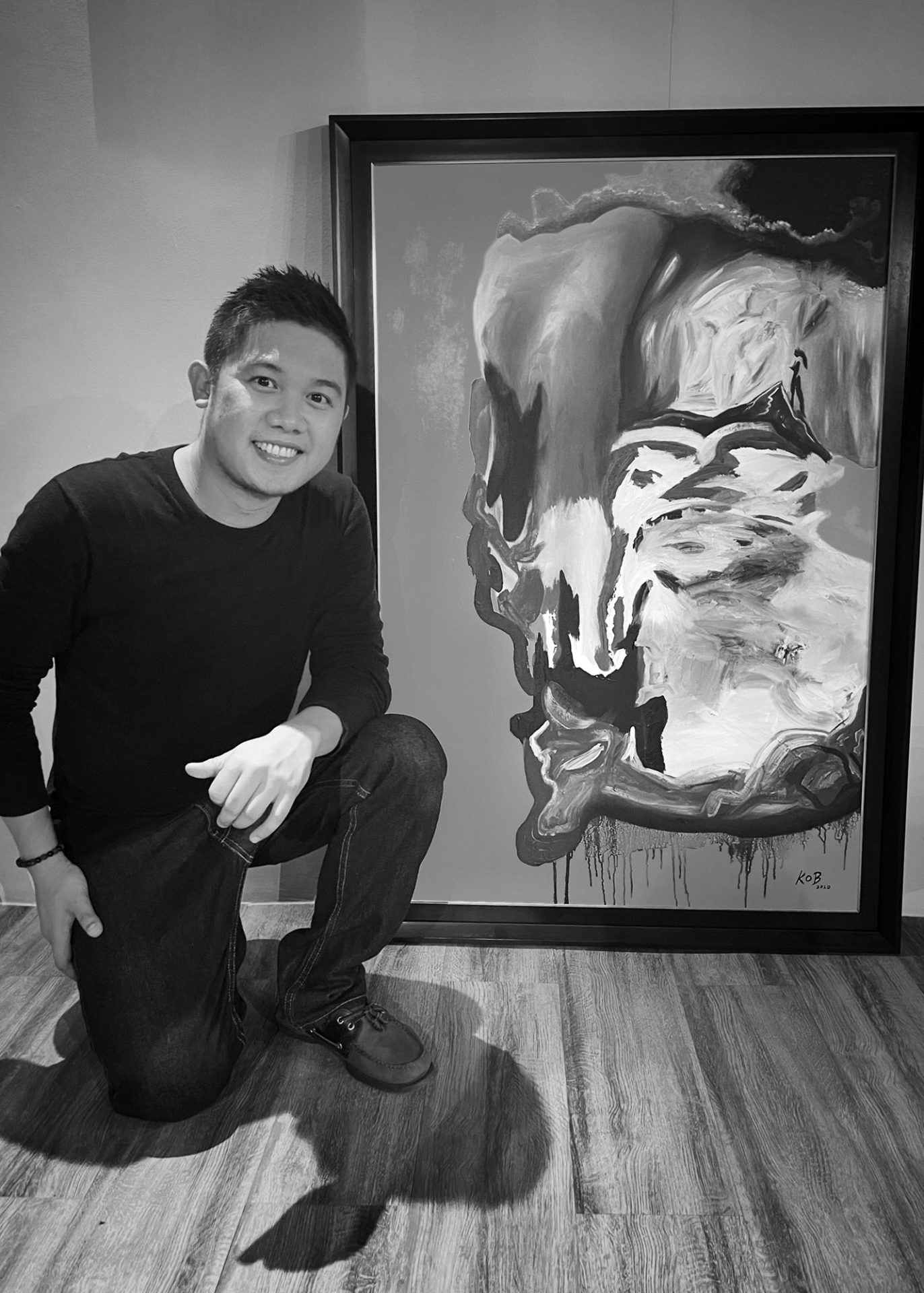 Kenn Ocampo Bastasa is a 28 year old self taught artist who was born on July 23, 1992 in Dapitan City but he grew up in Dipolog City which is known for having the most beautiful orchids in the Philippines. The second child of Mr. Wilman D. Bastasa, who was a gold miner who eventually became a well-known artist, and Mrs. Maria Gemma O. Bastasa who was a homemaker who took care of 5 children while being an entrepreneur who was in-charge of running the family business of making longganisa – a type of smoked sausage.

Kenn professed that his first and greatest influence is his father whom he grew up watching his art being exhibited in galleries. His father, Mr. Wilman D. Bastasa, has a great reputation for his abstract painting, surrealism and expressionism whose influence can be still seen in Kenn’s artworks to this day. He recounts Sundays spent with his father in local parks where he would paint landscapes on an empty canvass his father would provide for him.

During his teenage years, Kenn transferred schools and found friends that made him forget about art. He recalled that his youthful follies ended with him going to school drunk and that he completely forgot they were supposed to bring materials for his art class. He eventually borrowed from his classmates and painted his palms and used it as a medium to create art. This led to his art teacher at that time, Mr. Arnold Rubiato, to notice and commend Kenn for his talent and he ended up with the highest grade in his class.

Kenn eventually had to leave his hometown for college. He dreamed of taking up Architecture or Fine Arts but since he came from a family of nurses, he had no choice but to take up Nursing. He only lasted for two semesters before he transferred to another course which is Respiratory Therapy . During these times, he would use his allowance to buy cheap art materials such as watercolours, canvases and sketchbooks just to practice his art. In 2015, he graduated and passed his licensure exam in Respiratory Therapy.

Kenn now works as a Respiratory Therapist in a government hospital in Cebu and even though his struggling artist days are over, he still finds himself struggling to find time to hone his skills as an artist. This is why sometimes he would ask to leave work for a couple of days just to focus on his art and travel to find inspiration in nature. He believes that expressing and creating art is his way of knowing and showing his inner self. He will continue creating art because this is his way of reimagining reality.

Imagination is the animus of the soul. Without it there would be no art, no music, no science, no civilization infact. It actually shapes and reshape our reality. We’re moving boundaries and freeing the spirit to a soul.It is the spark of life. A hinge of madness! The beginning of creation. Reality has limits, imagination does not.