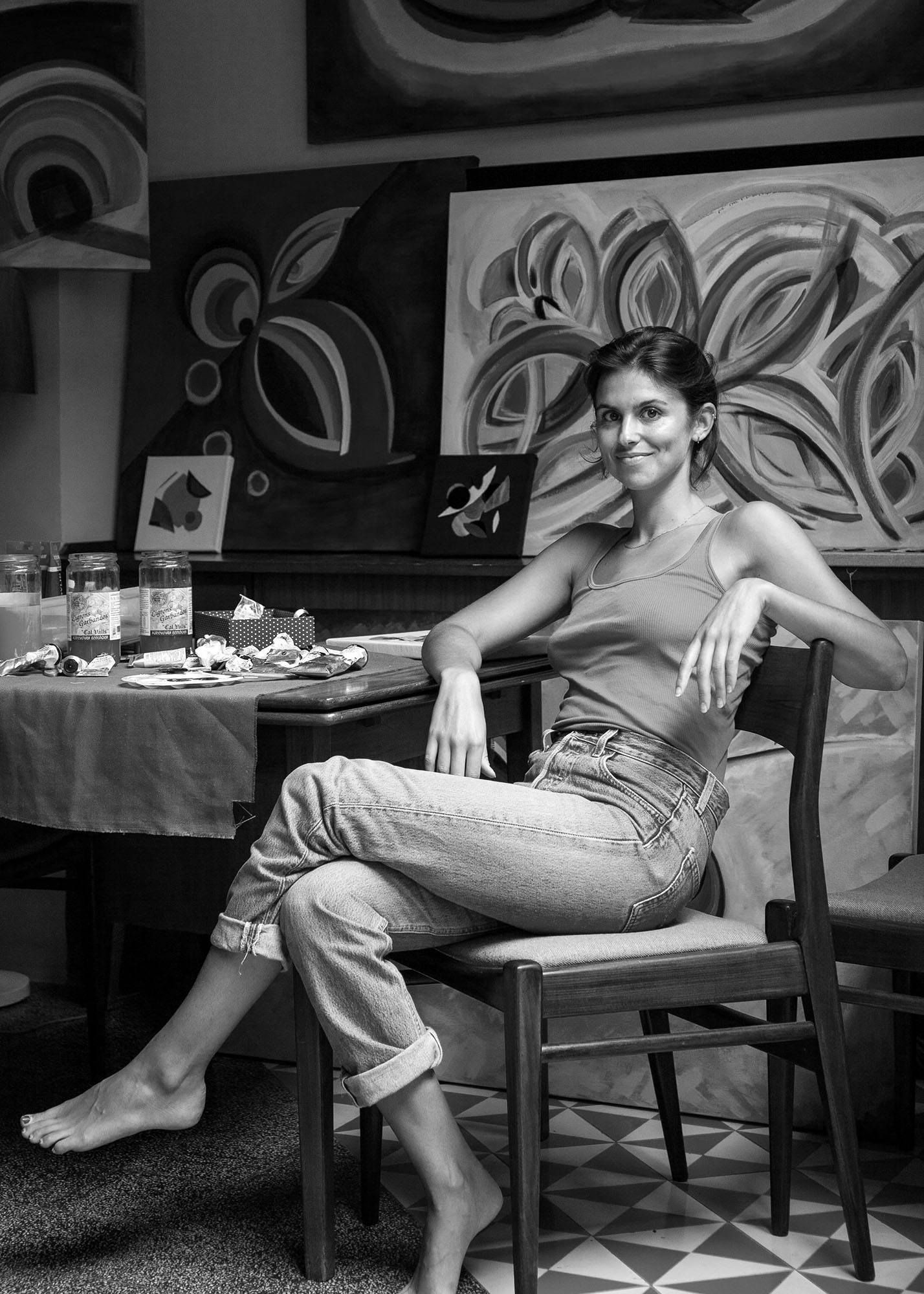 Raised between France and the UK, Imogen has travelled across Europe, Myanmar, India and Latin America taking inspiration for her art and design. After gaining experience in the fashion and textile industries of Paris and London, Imogen set out to explore her passion for Anthropology, notably indigenous, taking up related studies in Bordeaux then Lima, where she grew particularly fond of Quechuan culture.

From 2018, IH spent time living in Barcelona where she studied Textile Design, as well as establishing herself as a painter. There, her first art collaboration was with the boutique hotel, Retrome.

My current project is called 気 Ki and combines painting and dance. 気 Ki is a Japanese concept that refers to a life force, similar to air and breathing. It is an energy that flows through the universe and everything in it. Similarly the concept animism greatly resounds with me as well and is occupies a particularly important place in indigenous cultures.When studying in Peru, I was inspired by my classes relating to indigenous cultures of the Andes and Amazon, particularly Quechua – how they integrate their beautifully metaphorical language, cosmology and beliefs in day-to-day life. One of my literature professors there gave a compelling insight into these cultures, full of rich anthropological, philosophical and metaphysical research. I hope to develop my own research and further integrate these areas in my artistic projects.Music plays an integral role in my work, especially in dance. Generally a useful tool in creativity, it inspires me to explore even more areas both in my body and imagination. Movement in the line and form of my paintings appeared long before I began dancing, as if subconsciously I was already paving the way to my natural transition into exploring my own physical movement.I love experimenting and exploring, so my creative process is ever-changing. This also has a lot to do with the different spaces I have had to adapt to in my moving around, therefore influencing how I work. I don’t usually plan a painting in advance, but shapes, movement and colour do appear in my mind. I love to paint freely and not set up concrete intentions. If I have quite a clear idea on what I hope to achieve, be adaptable in the process and open to what happens. « Error » is never a thing, if anything that’s where the best discoveries lie, if you pursue in pushing it. Especially not to get hung up on something that comes out differently to how I imagined. An exercise that helps reinforce the mentality I have in day-to-day life.The visual can be so powerful that, supported by the perception, experience and imagination of each individual, it provokes an emotional and thoughtful reaction linked to all senses. By obtaining a pictorial profundity where all senses intertwine, one can create an experience that is personal and stimulating. Continually with a thirst and curiosity to discover and study the world, I strive not only to translate my experience in a universal language of visual, musical feasts, but also be able to transmit its richness, complexity and spirit with the hope that, in some way, it might awaken and illuminate others.About my project 気 KiAccompanied by selected rhythms of music, IH moves spontaneously through space, collecting, creating and shaping energy. In form of authentic gestures, the music inspires an opening between interior and exterior worlds of the body, canal and meeting ground where different vibrations assemble – the collected energy in the space and time of movement, as well as the soul’s archaic experience and body’s cellular memory. All energies come together in an ephemeral act of dance and painting, expressing themselves in harmony to create a permanent material trace in the form of spirited brush strokes, that give pictorial evidence to the belief of animism.I began exploring dance during first confinement, primarily guided by the desperate desire to feel free and need to release psycho-emotional tension in order to maintain inner balance. In further intuitive research, I became increasingly aware and understanding of the potency of dance and nuances of energy – findings that reflected my organic development as a painter, and helped make further sense of my own nature and identity. Bridging parallels between meditation, ecstatic and conscious movement, I continue to explore dance and play with energy, while developing my own anthropological, spiritual and scientific research on their role in different cultures, and in the relationship between humans and nature.