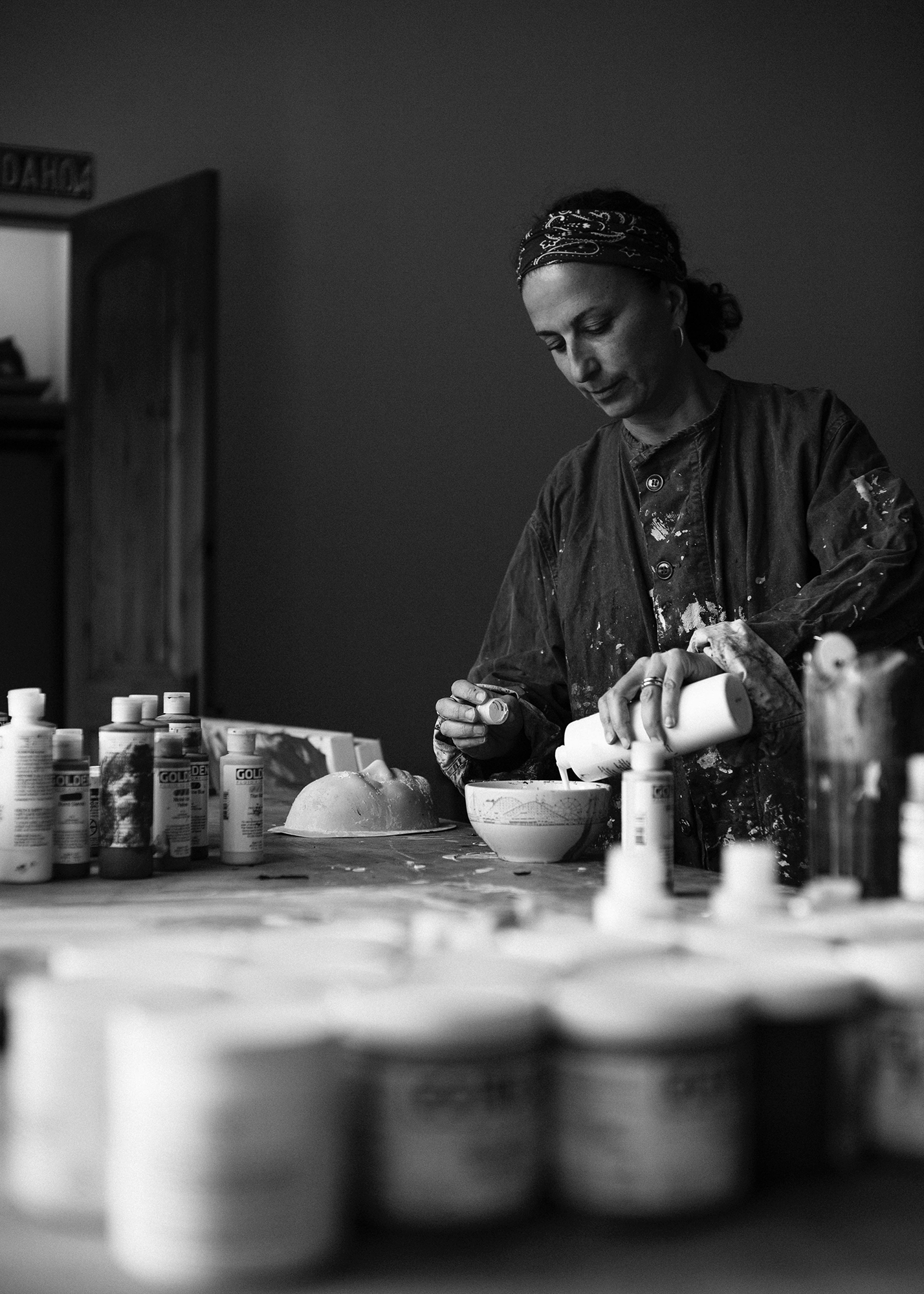 Bex Wilkinson was born in Chicago, Illinois to parents who were avid art collectors. Growing up in a house where she was exposed to The Harry Who (date?,) German and French Expressionists, as well as little known artists, imprinted her mind that art was of paramount importance in the world. At six years old, she declared she would be an artist and paint the ceiling purple with pink polka dots! Local Chicago and New York artists influenced her work like Seymour Resofsky (dates?,) Iving Petlin, and a slew of up and coming independent artists. Later, she became obsessed with the post war German and French Expressionists. Max Beckman, George Groz, Kathe Kollwitz, and Vincent Van Gogh gave her a map of how to define her mixed emotions of growing up in a conflicted household, and the paradox of the what she observed in the human condition. Later, Frida Khalo, became her idol in terms of a woman artist who was able to define the complicated relationship of love and pain. Bex graduated early from Highland Park High School and attended The Art Institute in Chicago for her second semester Senior Year. Then,Bex studied painting at Pitzer College, in San Bernedino, CA. and transferred to Sarah Lawrence Collge, in NY, as her curiosity about the nature of the mind expanded. It was there that she had access to the Metropolitan Museum of Art, and The Museum of Modern Art. Regularly, she would go visit, paint, and study first hand the artists that she admired. During her time in NY, she met Alex and Allyson Grey through her father. They became life long friends who influenced Bex’s work. After the unfortunate early death of her father at the age 20, she created The Chapel of Sacred Mirrors with the Grey’s in order to house a non-denominational art sanctuary that valued Visionary Art featuring the art of Alex Grey. She remained Chair of CoSM for 20 years. After graduation, Bex moved to Portsmouth, New Hampshire to live with her peers and paint. For two years she painted, along with other aspiring artists, at “The Button Factory.” Doing a multitude of art experiments- including performance art. To further her study, she moved to Providence, Rhode Island, in order to better her technical skills and work with professor Lenny Long, as an adjunct student to Rhode Island School of Design. It was from there that her life took a change. Her interest became psychology and the influence of spirituality on the psyche. She attended Antioch New England graduate school. On completing graduate school, Bex’s focus became domestic. Moving to Vermont with her husband and having two children, she wrote screenplays and became a mother and a gentleman farmer. Her husband, David and she moved to Sun Valley , Idaho in 2004 where they settled. Although the marriage failed, Bex began entrepreneurial activities including film production with Crisman Films producing work such as “Jerusalem: Living in the Shadow of God.” She also began film festivals. In 2008 Bex met Caleb Baukol and started an independent boutique ski company called “Big Wood Ski.” The untimely death of her second spouse, Caleb, sent Bex into a spiral of depression wherein she brought forth her tools as an artist and created an art installation about the nature of Impermanence. This art installation took place, with various multi media art and artists in the dwelling in which her spouse killed himself. From then, Bex has been a dedicated artist. Creating short films, paintings, and multimedia installations. It is finally, that Bex Wilkinson, has now dedicated her time and energy to her craft. We now present Intothemadhouse.com as selected pieces of a lifetime.

Bex’s background with grief led her to create works that probe what lies deeper within the human psyche. The early loss of her art enthusiast father and the suicide of her spouse in 2016 awakened a dormant need to create. Bex returned that same year to explore both her grief and the uncomfortable topics of contemporary society and its downfalls after 20 years of not painting. Delving into her subconscious, Bex channels what weighs on the collective unconscious. Often the subjects of her works emerge as archetypes labeled from Jungian psychology. The symbols of the mandala, the crucifix, and skeleton iconography often appear in her work to guide the viewer into what she sees as the unending cycle of karma and suffering. Her work frequently infuses humorous collaged elements of modern society which describe the circus in which humanity engages in the face of death. Bold brushstrokes and purposeful free-form application of paint speak as a metaphor of the mess that is the human experience. Bex lives and paints in Sun Valley, ID. Her work consists of both abstract and life studies. Her medium-large scale abstractions are primarily mixed-media on linen canvas, and her life studies are pen and pastel on paper. Wilkinson’s work currently explores complex global topics, including the transgender movement, failing health care systems, and most recently the Pandemic. Bex graduated from Sarah Lawrence with a Bachelor of Arts. Post-university, she spent several years as an adjunct student studying at the Art Institute of Chicago and Rhode Island School of Design.